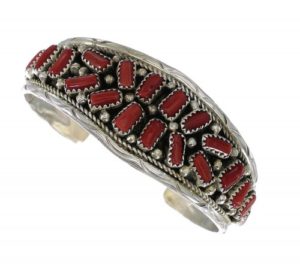 A breathtaking way to honor nature, by incorporating coral stones into their jewelry, Native Americans were able to achieve a result that is truly unique to their culture. Most people are familiar with their pieces that use turquoise, but coral is another avenue Native Americans have taken when making stunning pieces of jewelry, especially sterling silver and coral bracelets.

Across numerous cultures, coral has always held special value and meaning. For example, in Greek mythology, coral represents beauty and transformation. The history of crafting jewelry from coral can even be traced back to the Stone Age.

However, in Native American culture, coral pieces take on new meaning and mirror the purity and beauty of water itself. Native Americans can trace the use of coral as far back as 600 years, passing the history and craft through oral storytelling.

The art of crafting coral into jewelry became popularized in Native American culture after trading with the Spanish and their “Blood Coral” from the waters of Spain and Italy. This unique array of colors became a good source of trade later on. Notably, the Wampum were known for their beading techniques, strung into various necklaces and bracelets. They used the coral to do much the same.

After Native Americans mastered silversmith techniques they quickly learned to cut the coral and set them into their rings as if they were turquoise or various other gems, common to the tribes during that time.

Since the time of the Spanish, Native American artists have continued to perfect the art and quickly developed their own styles of shaping the stone into unique styles and shapes that are popular today, like stranded and beaded coral pieces. By setting rich and colorful coral into sterling silver settings, Native Americans have created an art all their own with coral bracelets and other coral jewelry.