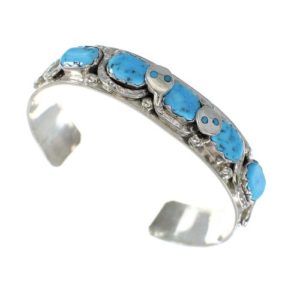 For a long time the Native American people had no written language in which to record their history. Instead, they relied on oral storytelling and symbolism in their art to pass their history to the next generation. One way they did this was through their jewelry. By using the techniques they learned from other countries or what they already had known. By the early 18th century, silversmith techniques were already popular among the tribes and they used symbolism to convey meaning in their art as well.

Although there are many tribes that have their own meaning for different animals, patterns, and other symbols, there are a few common ones that are featured in many different tribes across the country that hold similar meanings.

The Arrow Symbol– As the bow and arrow was one of the most important pieces of technology in their culture, allowing them to hunt much more easily, the arrow symbol is often interpreted as a literal figure of the tool. In this way, the arrow can mean protection and defense. Some tribes even vary this by creating different versions of the arrow. For example, a broken arrow means peace among tribes.

The Crow Symbol- While many people and other cultures see the crow as an ominous sign, foreshadowing death and destruction, many Native American tribes see the crow for what it is, an intelligent creature. The crow symbol is used to signify intellect, perspective and fearlessness.

The Snake Symbol– The snake is also commonly misinterpreted as something evil. In most Native American tribes, the snake is given to mean healing, rebirth, and a general sign of good luck, taken after its nature to shed its skin and become “reborn anew”.

Bracelets that are imbued with these symbols are believed to give the wearer these same favorable attributes wherever they go.